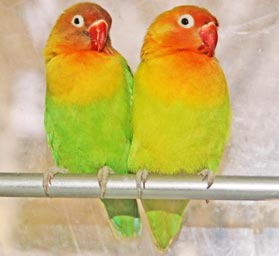 Love birds have been kept as pets for over a century. They are prized for their playfulness, curiosity, and affection. Because of their small size, they are also easy to take care of, requiring less space than large parrots, and ideal for apartment or condo dwellers. The common green variety costs about fifty dollars, though the rare color mutations can easily cost three or four times more.

Though lovebirds are small, they still need roomy cages. They are very energetic birds, and need plenty of space to hop from perch to perch, splash in makeshift “bird baths” and swing from toy to toy. Sometimes, when feeling particularly playful, they will roll around on the floor of their cage, especially if their acrobatic skills draw an audience. These birds love attention, and may put on a special performance just to get you to take them out of the cage.

Love birds are generally sociable, though they must be hand-fed so that they’re easier to tame. Wild or parent-raised love birds will shun human company, and can even get “nippy” if they feel they are being attacked or bothered. It’s also best to get them when they’re young. They are quite fearless and stubborn, so it’s important to establish rules—like no biting or nipping—before the habits set in, and they see you as a threat to their own territory or authority.

However, those who have adopted humans as their “wingless flock” will actually want to learn tricks and play games. They are one of the easiest birds to train. They enjoy playing peek-a-boo—sometimes from an empty paper towel roll, or after burrowing under their owner’s hair! With enough patience you can teach them to do this on cue. They can also be taught to give little bird kisses, step up and perch on one’s hand, or bob up and down to “beg” for a treat.

Love birds are sociable, so they will chatter endlessly and occasionally scream. However, they are definitely not as loud as other parrots, and their “talkativeness” makes them good candidates for learning words. Like many hook bills, these birds are adept at mimicking words or sounds like whistles or songs. They also have a very clear voice, and can enunciate much better than other parrots.

Love birds cannot be caged with other birds, since they can be very protective of their territory—even going against large parrots like the macaw!