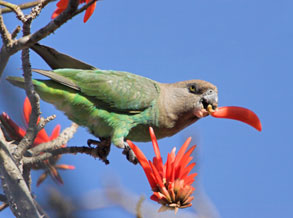 Poicephalus parrots are beautiful, but require careful handling. They have sensitive, nervous temperaments. Animal behavioralists believe that they have heightened reactions. This means they can be hyper aggressive (attacking birds that are four or five times their size!) or hyper timid (plucking their fingers, refusing to eat, or even attacking their own young if they are stressed).

The temperaments of the poicephalus also change per variety. For example, the red bellied poicephalus is more outgoing, and is ideal for those who want to teach tricks or words. It does, however, have a habit of biting, which means that it may not be the best pet for households with young children.

The brown headed poicephalus, on the other hand, is an incredibly affectionate and loyal bird that can even be possessive of its owner. It is not the best talker in the group but can learn several dozens of words with patient training. It is less nippy than the red bellied poicephalus, and is therefore “safer” for kids.

The jardine poicephalus is one of the most popular varieties, due to its playfulness and affection. It loves being petted, and will do pretty much anything for attention. One owner even said that his bird would play dead, if only to get its owner to run to the cage.

The poicephalus’ sensitive temperament requires owners to be very patient and gentle. If hurt or neglected, or placed in poor living conditions, it will become aggressive or depressed. For example, a bird that is forced to live in a very small cage may start plucking its feathers or simply refuse to eat. It also has a tendency to get bored—its playful nature requires constant stimulation—so toys are absolutely essential. Without anything to do, it will put its remarkable attention to trying to escape!

It sounds like a lot of work, but parrot enthusiasts say that the poicephalus that is happy and well taken care of can really be very charming. When it knows it has done something wrong, it will hop from one foot to the other, cocking its head as if to say, “Who…me?” It will go out of its way to please you, and will gladly perform tricks just to make you laugh.

It takes a special kind of owner to bring out the natural joyful spirit of this special bird. It’s not easy to take care of it, but the rewards are great.