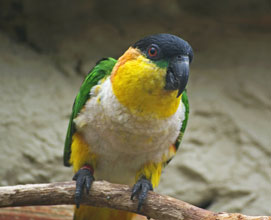 Caiques are the “clowns” of the parrot family. They love attention, and will perform for the crowd: hopping, preening, and delighting all with their amusing antics. Sometimes they are called “The Dancing Parrot” because of their tendency to prance and bob their little heads, especially when egged on by rhythmic clapping.

Caiques are affectionate, loyal and devoted to their owners, and remarkably intelligent. Bird expert Rosemary Low, whose book in parrot aviculture, says “no other parrot has a personality quality the same.”

The caiques are small, brightly colored birds that belong to the parrot genus, Pionites. There are two kinds: the white-bellied caique, and the black-headed caique. However, their plumage is as bright as the tropical gardens of the Amazon rainforest, from where they originated. A single bird can have feathers of green, yellow, orange, blue, black and white—truly a colorful bird, with a colorful personality.
Say that again?

Wild caiques can be found in the lush Amazon rain forests. They are considered to be canopy dwellers, meaning they prefer to inhabit the highest branches of the highest trees.

Caiques have always been one of the most difficult birds to breed, and until the early nineties, they had to be caught from the wild and imported. They were so rare that they could only be found in zoological gardens, and were only sold as pets—often for exorbitant prices—in the late 1950’s.

The Wild Bird Conservation Act made it illegal to import or sell wild caiques. Thankfully, breeding efforts have become more successful, though the birds continue to be one of the rarest and most expensive.

Called Pionites leucogaster, this beautiful bird is distinguished by a yellow-orange head, brilliant blue feathers, green wings and back, and a white belly. Its feet can be pink or gray.

Some white-bellied caiques have green thighs, but most of the birds you find in pet stores have yellow thighs.

This bird is sometimes called the Pallid Caique, or the Black-Capped parrot. Its coal-black crown is beautifully complemented by its bright orange head feathers and yellow leg feathers. It’s one of the few parrots that will eat insects aside from seeds and flowers.