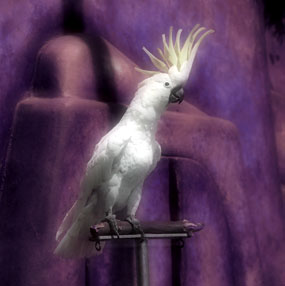 A Cockatoo belongs to any of several crested parrots native to Australia and Northwestern Asia and the nearby islands. Cockatoos have powerful hooked bills, thick fleshy tongues and short, strong legs which all fit the common description of a parrot. However, they are the only parrots that have crests of long feathers that they can raise or lower.

Most Cockatoos are white but some are tinged with pink or yellow or have crests in other colors. In the wild, Cockatoos usually fly through treetops in small flocks, feeding on fruits, seeds and nuts. Several species of Cockatoos can be tamed but relatively few can be taught to talk.

There are about 17 species of Cockatoos ranging from 12” to 27”long. Cockatoos are included in the list of birds commonly resold as adults. This is usually attributed to some behavior problems which prompted their owners to give them up, although this is not always the case. The particular behavior problem often pinpointed is screaming.

Cockatoos are especially picky eaters with some exceptions. A varied diet based on pellets with servings of fruits, vegetables and other food consumed by humans added to its daily diet is best. They love sharing mealtimes with their flock which would include the owner in the case of pet Cockatoos. It is not necessary for the bird to sit at the same table with its owners. Including the bird in mealtime by providing it with its own serving of whatever is being eaten by humans is sufficient. It is important to observe limitations as to the quality and totally avoid avocados, chocolate, caffeine and alcohol which are all toxic to birds. Junk foods high in fat, salt and sugar should be severely limited while dairy foods should be taken in moderation. Low-lactose dairy foods like skim milk, yogurt and most cheeses are usually suitable. Meat can be fed in very small amounts.

Cockatoos are big birds thus the larger the cage, the better it is for the birds. The smaller species would do fine in a cage with minimum measurements of about 2’ x 2’ x 3’ but a larger size of 2’ x 3’ x 3’ would be more comfortable. Toys are a definite necessity. These are expected to be replaced routinely since Cockatoos are big chewers. A play stand would be a welcome treat for Cockatoos.

Most Cockatoos love baths especially through the spray-bath method. The spray-bath can be set to produce a fine mist which can be used to spray over the bird similar to a falling rain. After sometime, Cockatoos would prefer that owners spray them directly until they’re absolutely soaking wet. It is ideal to keep the wings and nails trimmed.

Notwithstanding the many cases of behavior problems associated with Cockatoos, they remain as sought-after pet birds due to its cuddly personality. A well-raised Cockatoo is a pleasure to have around. A badly raised one is a nightmare.

Cockatoos are probably the loudest of the parrots. They love screaming, seemingly for the sheer joy of it. The smaller Cockatoos are relatively quieter due to the reduced size.

Owners with no bird experience may find it difficult to handle Cockatoos. They scream and scream when they don’t get the attention they want. Cockatoos are definitely not for owners who cannot establish guidelines and owners who work long hours. Cockatoos are wonderful birds but they are not for everyone. Doing a research on Cockatoos first before purchasing could save both the owner and the bird a lot of trouble.