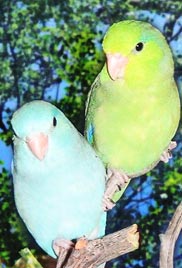 Parrotlets are the smallest kinds of parrots, measuring just 5.5 inches in length
You can hold one in the palm of your hand! Nevertheless, pet owners say that these intelligent, energetic and affectionate creatures have all the personality and the appeal of the bigger birds. Due to their size, they are the ideal choice for people who may not have the space for the African Gray, or other large birds.

Parrotlets are endemic to South America, specially the countries of Peru and Ecuador. They are tropical birds, and their vibrant plumage reflects the incredible flora and fauna found in the rainforests. They are actually closely related to the Amazon parrot.

There are several species of parrotlets, though only three are actually sold as household pets.

The Pacific Parrotlet (also called forpus coelestis) is the most common variety, and is usually sold at pet stores. It is sometimes called Lesson’s Parrotlet, or Celestial Parrotlet. They usually come in a bright emerald green, though the males may have brilliant blue feathers along their eyes, neck, back or rump. Females usually have light blue feathers, and the markings are not as clearly defined. Their beaks are ash colored, while their legs are a baby pink.

Pet stores may sometimes carry Pacific Parrotlet Mutations. You can find birds with unusual colors of yellow, fallow, albino, Isabel, and pastels. These are more expensive than the green parrotlets.

The Green Rumped Parrrotlet, also called the Giana Parrotlet, has less blue markings. Females sometimes have yellow feathers. The Spectacled Parrotlet, on the other hand, has yellow-green or blue rings around the eyes. Males have bright yellow markings near the beaks, while females have them on the forehead.

The Mexican Parrotlet is the largest in the family, and has beautiful turquoise feathers. Unfortunately, they are difficult to breed, laying eggs just one a year, and often taking years between clutches. They are expensive and considered rare.

Some breeders have formed a cooperative with the goal of increasing the Mexican Parrotlet population in the United States.

The Blue Winged Parrotlet is slightly smaller than the Mexican Parrotlet, though the two varieties are so similar they are often mistaken for each other. It’s harder to identify males and females, though some aficionados say that the latter have more vivid yellow markings.