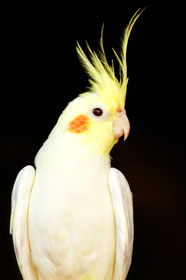 The cockatiel is a gentle, intelligent and friendly bird—a temperament that has made it one of the most popular household pets.

The cockatiel originated from the wetlands and bush lands of Australia. In fact, its scientific name (nymphicus hollandicus) means “Goddess of New Holland”. However, all pet cockatiels are bred domestically, since Australia banned exportation of its native birds in 1894. It is sometimes called Weero or Quarrion.

The cockatiel is the smallest member of the cacatuidae family. Like its fellow cockatoos, it has a vivid crest (which “fans out” whenever it’s excited) and facial feathers that actually cover part of its beak. However, it is much smaller than other cockatoos, and has the longest tail feathers—about half of its entire length!

The most common color for cockatiels is gray, with darker top feathers. Its wings are usually white, while its facial feathers are a bright, colorful orange. Some female cockatiels may have yellow spots, though these are usually half-hidden by its wings.

There rarer, and more expensive colored cockatoos. For example, the Lutino is white, not gray, and has bright yellow facial feathers. Among males, the color extends to the head, and part of the chest. The females, on the other hand, have yellow tail markings.

The pearl cockatiel is grey with touches of white on its wings and back, though this will disappear among the males. There are also cockatiels with gray and cinnamon/rust red markings, or yellow and cinnamon (called fallow cockatiels).

Pied cockatiels are a smorgasbord of color, with irregular patches of anything from yellow, orange, brown, cinnamon, or gray. It’s difficult to tell whether a pied cockatiel is male or female, so owners will need to get a DNA test.

The very rare, and expensive, albino cockatiels are pure white (they are sometimes called white faced lutinos). They are always female, and have unique pink eyes, beaks, and toenails.

Other rare colored cockatiels: silver, or pastel with yellow face markings. Generally, female cockatiels tend to retain their color after molting. There have been some reports of olive cockatiels, but these have not been officially recognized by the Cockatiel Society.

With the proper care, domesticated cockatiels can live as long as 20 years. The average lifespan, however, is 15 years. Some owners claim that their pets lived to be 30 years old, but these are rare and yet unproven.

Cockatiels are calmer, and tend to be less aggressive than other birds. That’s why it’s difficult to mix them with other breeds like budgerigars, which may bully or even injure it.

Cockatiels can get very attached to owners and will call for them across the room. They may also get possessive, nipping strangers who try to come near their beloved “human”. That’s why it’s essential for the cockatiel to be familiarized with everyone in the household.

Being very sociable, cockatiels can’t be left alone for long periods of time (they can get depressed and stop eating or interacting). If you are away for most of the day, get two birds.