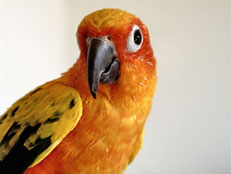 Conure owners speak fondly of these birds affectionate, though somewhat erratic, personality. They have mood swings, clowning around one minute and then shrieking angrily the next. There are also a few which will pick one person and then reject all others: offering its head for you to scratch, but then biting anyone else which attempts to approach its cage.

However, conures can be one of the most entertaining birds, and if they’re hand fed and used to humans, can be taught several tricks. Some of them will actually learn to “play dead”—lying on its back on command, and then staying there until you reward it with a treat. Others will not only perch on your finger, but flip back and hang upside down.

They are very sociable creatures, though. They need more attention than parakeets, and like being babied with treats and petting. Despite their moodiness, they have less behavioral problems than the bigger parrots, except for the tendency to nip strangers. That can easily be remedied with consistent training, though in general, they are not good pets for young children.

With proper care and good diet, conures can live from 15 to 35 years. Most of the types sold in pet stores are low maintenance, requiring—like all other birds—just a clean cage, toys, and human interaction. They can get messy though, because of a habit of dropping their pellets into their water. Most enthusiasts recommend training them to use a water bottle, but if not, just clean the dishes several times a day.

Conures can get mischievous, and their curiosity can get them into trouble. Some pet owners recommend clipping their wings, if only to protect them from wandering too close to a ceiling fan, or prevent it from “burrowing” its way through your favorite antique furniture. They will need a lot of stimulation, though, so owners need to take them out of the cage each day.

Conures are not recommended for apartment dwellers because of their very loud voices. If you’ve got very sensitive neighbors, or personally prefer a peaceful household, get another bird or buy a Pyrhurra conure—still vocal, but at least, not as ear-splittingly noisy as the other varieties.

If you’re thinking about buying a conure, consider first if you’re the type who’d be amused, rather than irritated, by the bird’s very strong personality. It’s stubborn, and knows what it wants and will say so. Though it can be tamed into sitting on your shoulders, it can “playfully” (but still painfully) nip or screech if you do something it doesn’t like. However, it is entertaining and playful, and its intelligence makes it a good candidate for learning tricks (though not a lot of words).