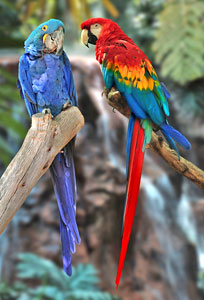 Macaws-The Plight of the Macaw

Conservationists are working hard to protect the macaws. Most of the 17 species are endangered, and the world would lose one of its dearest and most precious treasures if these birds would completely become extinct. The hyacinth, red-fronted, and blue-throated macaws are on the brink of disappearing. Experts also fear that the Glaucus macaw and Spixs macaw have been eradicated completely.

But the macaws are birds worth saving. Aside from being very beautiful, they are also strong and graceful. They have powerful beaks that can break the shells of the hardest seeds, while their flexible tongues actually have a bone inside them that can pierce the skins of fruits. The macaws also have very flexible feet, which can expertly latch on to branches and even examine items.

Macaws are also remarkably intelligent. They live in huge flocks of up to 30 birds, and have developed a complex system of calls that allow them to communicate with each other from across the forest. Their language skills are so good that domesticated macaws can even mimic human speech.

The macaws are very quiet in the evening, but rouse in the early morning to soar through forest and hunt for fruit and nuts—and even snails and insects! They have also been known to feed on damp soil. Scientists believe that soil contains chemicals that neutralize the toxins or gases contained in the nuts.

Macaws also have very intimate family systems. Partners mate for life, and their interactions aren’t limited to mere breeding or feeding the young. They groom each other, they hunt together, and they will even share food and protect each other from predators. The females are usually given the job of watching the eggs and the hatchlings, but the males are hands-on parents, too—they bring back food, and stand guard over the nest.