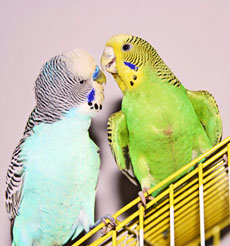 Parakeets are one of the most popular household pets in the world. They are very friendly, adore attention, and are easy to train. Since they are flock birds—and used to being part of a large bird family—they easily adapt to a household and think of their human owners as their big and wingless brothers.

The parakeets were endemic to Australia, and were called “budgerigars” by the aboriginal peoples. The word means “good bird” and “good food”—referring, unfortunately, to their taste. They were roasted and served as snacks.

However, European visitors took one look at the beautiful, colorful birds and realized the potential for selling them as exotic pets. They were first exported to England in 1840, sparking a “budgie boom” that lasted until the 1920’s. The pet stores would sometimes call the birds “parakeets” because they looked like little parrots. This name is sometimes shortened to “keets”.

Parakeet sales only slowed down during the first and second world wars, but picked up in the late 1940’s. Today, they are one of the most popular pets, with millions of households wrapped around their little feathers.

The scientific name of parakeets is Melopsittacus undulates, which translates to song parrot with wavy lines—the latter referring to the black markings on their wings and head.

The most common parakeet colors are yellow and green. The blue and white colors are recessive, and emerge only though careful breeding. Thanks to advances in genetics, breeders have also been able to create multi-colored parakeets, or those with light stripes (these are called cinnamons). You can also find parakeets with touches of gray.

There are also albino parakeets, which are yellow with white cheeks and pink eyes. However, these colors are genetic mutations, unpredictable, and considered “lucky accidents of breeding”.

Since parakeets are flock birds, they’ve developed a wide range of chirps to communicate with each other. They may not be as loud as other parrots (notably the macaw and cockatiel) but they will call your attention.

A happy parakeet will make a “warbling”, purr-like sound, usually when they grooming themselves or crooning themselves to sleep. If you play music, they may join the chorus with a joyful “fweeping” sound. When they are excited, they will shout “Ack! Ack!” and jump up and down. (This can deteriorate to an “Ark! Ark!” when they are agitated.) Very high-pitched chirps are usually a sign of distress or fear.

Parakeets can also imitate the sound of car horns, ringing phones, or even the calls of other birds in the vicinity. They don’t always learn human words, though. You will be more successful if you teach a male and hand-feed it when it is young.

Like all pets, the parakeets’ longevity depends largely on the care they receive. Without proper nutrition, they may die of malnutrition before they are 5 years old. They are also at risk for tumors from the ages of 5 to 7.

But when parakeets pass the “lucky 7”—the year when their risk for tumors radically drops—owners can expect their birds to reach a ripe old age. Some of them can reach 15 years, or even 20.